We are thrilled to announce the new 2020-2021 US Bank Broadway season! The Fox Broadway Club (seating in the first five rows) is currently sold out.  2019-2020 members will have first right to renew their current seats for the 2020-2021 season. NEW Season Ticket packages will go on sale this summer, date to be announced at a later time.

Enjoy the BEST of Broadway from the BEST seats in the house! From the moment you take your seat, you will be captivated by the pageantry of live theatre on the Fabulous Fox Stage and enjoy all the Fox Club amenities. 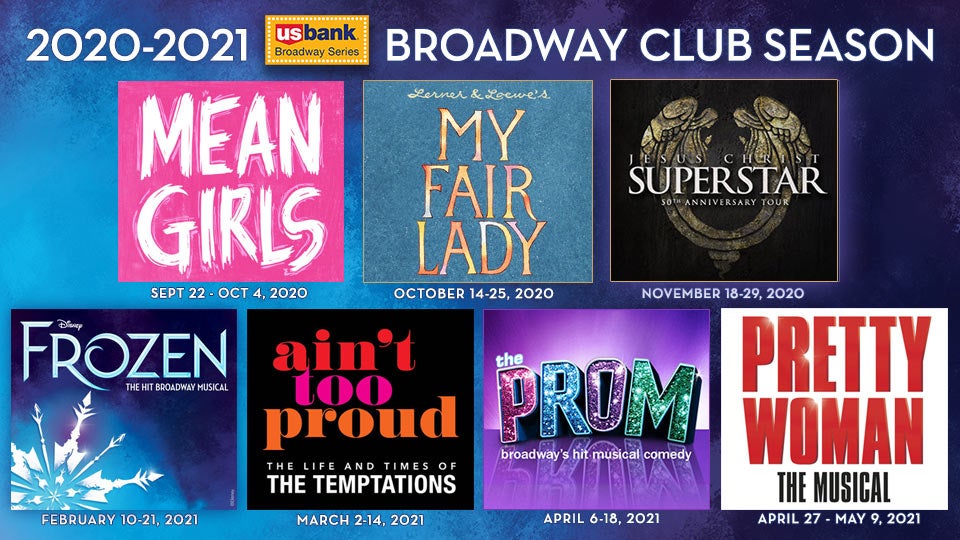 In addition to the Seven Shows in the Broadway Club Membership, we will present five exceptional BROADWAY SPECIALS this season:

The previously announced engagement of ANASTASIA has been postponed until a future season.

As a Fabulous Fox Broadway Club Member, you will enjoy your same great seats for all seven shows in the U.S. Bank Broadway series and delight in these outstanding membership amenities:

• THE BEST OF BROADWAY FROM THE BEST SEATS IN THE HOUSE!

• RESERVED PARKING for the season ticket shows and Broadway specials.

• EXCLUSIVE PRE-SHOW DINING FOR MEMBERS IN THE FABULOUS FOX CLUB

• PRIORITY PURCHASE OPPORTUNITY for Broadway specials in the first 5 rows.

• EXCHANGE PRIVILEGES * within the same show.

• SWAP TWO * is the option to swap up to TWO of your season ticket shows into any of the Broadway Shows listed.

•  PROTECTION against lost or stolen tickets.

*Prices vary by show and by performance. Prices may change without notice. Additional ticket costs may be due when swapping or exchanging tickets.

Prices include the 7-show U.S. Bank Broadway Series and Club amenities. All prices are per seat.

Information about regular Season Tickets for the U.S. Bank Broadway Series can be found on our season ticket page.