This event has been postponed, and plans to reschedule are currently underway. Ticket holders should hold on to their tickets – they will be honored on the new date.

Please note that the Fabulous Fox Theatre Box Office will temporarily be closed until April 5.

With Special Guest Eddie Levert of The O'Jays

Chaka Khan is one of the world’s most gifted and celebrated music icons. A singer, songwriter, actor, author, philanthropist, entrepreneur and activist, Chaka has influenced generations of music creators during her four decades as an artist. A ten-time GRAMMY ® Award winner, she has the rare ability to sing in a number of musical genres, including R&B, pop, rock, gospel, country, world music and classical. She is revered by millions of fans as well as her peers for her timeless, unmatched vocal style and image. The late, great Miles Davis noted that Chaka “sings like my horn.” And none other than the Queen of Soul, Aretha Franklin, has said that Chaka “is a one-of-a-kind, premier vocalist.”

During her legendary career, Chaka has released 22 albums and racked up ten Number One songs on the Billboard charts, seven RIAA-certified gold singles and ten RIA-certified gold and platinum albums. Chaka’s recordings have resulted in more than 2,000 catalog song placements.

“I am so humbled by the love, support and gracious spirit of my fans worldwide and the continuous support my peers have shown over the years,” says Chaka. “Throughout my career, I have been through the fire a few times over and I’m still here as a living testament to God’s love and grace.”

Still at the height of her astounding vocal powers, Chaka Khan is creating new projects and earning new honors. Her latest single “Like Sugar” has earned high marks from tastemakers; the track is from her brand-new album-length project Hello Happiness, due in the first quarter of 2019. In addition, Chaka is making history once again, as she has been named Grand Marshal of the 2019 Tournament of Roses Parade, making her not only the first African American Grand Marshal in the traditional New Year’s Day celebration’s 130-year history, but the first Grand Marshal to perform during the parade.

Chaka Khan has received a steady stream of accolades for both her artistry and philanthropy. Her awards include the Soul Train Legend Award (2009), the BET Lifetime Achievement Award (2006), the GRAMMY ® Honors Award from the NARAS Chicago Chapter (2006) and the World Music Award Lifetime Achievement Award (2003). Previously nominated for the Rock & Roll Hall of Fame four times – twice as a solo artist and twice with Rufus – she has been nominated again as a 2019 inductee candidate.

Print-Your-Own tickets will not be delivered until 3 days after the general on-sale date.

Prepaid parking is available for purchase in our 5-story garage! 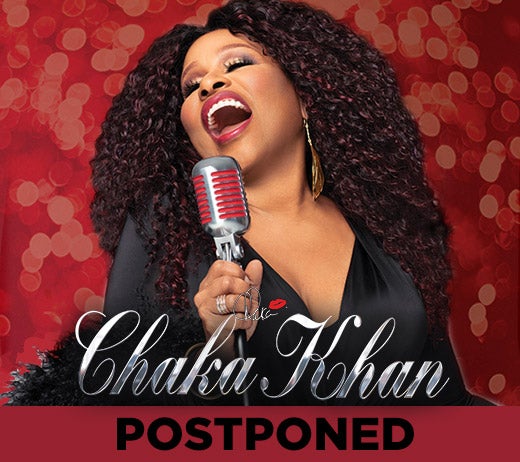