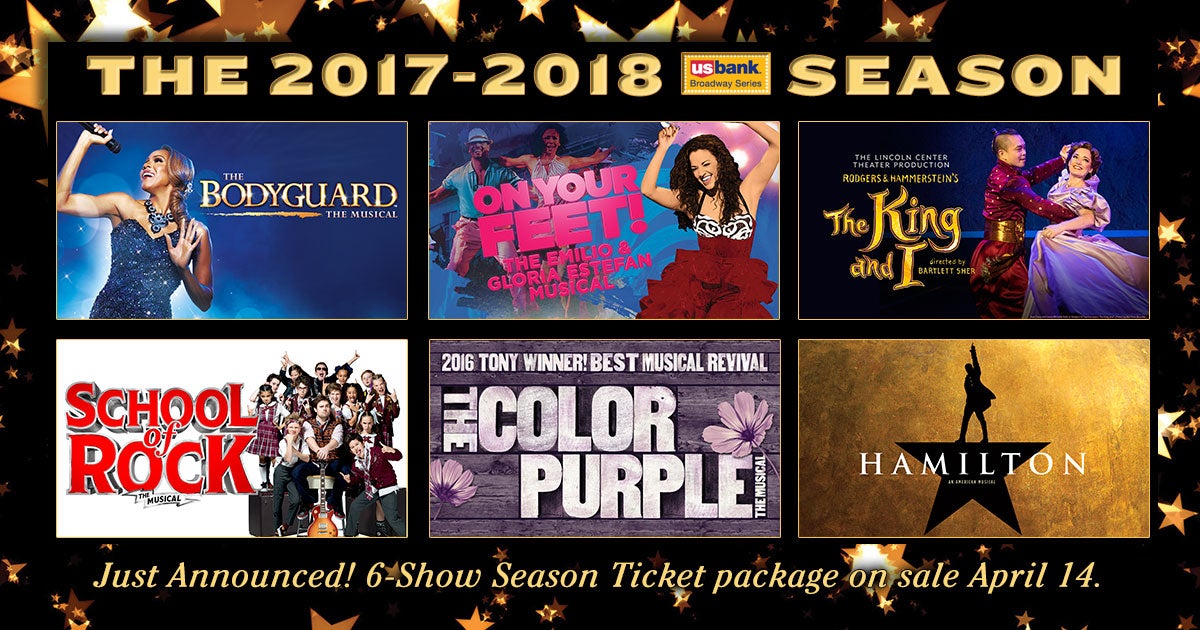 The Fabulous Fox Theatre announces an incredible season of St. Louis premiers and classic musicals in the 2017–2018 U.S. Bank Broadway Series. The season will include the previously announced HAMILTON making its Fox Theatre debut April 3-22, 2018 for a limited three-week engagement. The six-show season ticket package opens with the romantic thriller THE BODYGUARD followed by ON YOUR FEET!, the story of Emilio and Gloria Estefan.  Winner of the 2015 Tony Award® for Best Musical Revival, Rodgers & Hammerstein’s THE KING AND I will have you whistling a happy tune this holiday season. SCHOOL OF ROCK kicks off 2018 with fist-pumping exuberance and the 2016 Tony Award® winner for Best Musical Revival THE COLOR PURPLE visits in March. Seven specials will also be presented in the season lineup including return engagements of THE BOOK OF MORMON, winner of nine Tony Awards® including Best Musical, and the spectacular new production of THE PHANTOM OF THE OPERA. 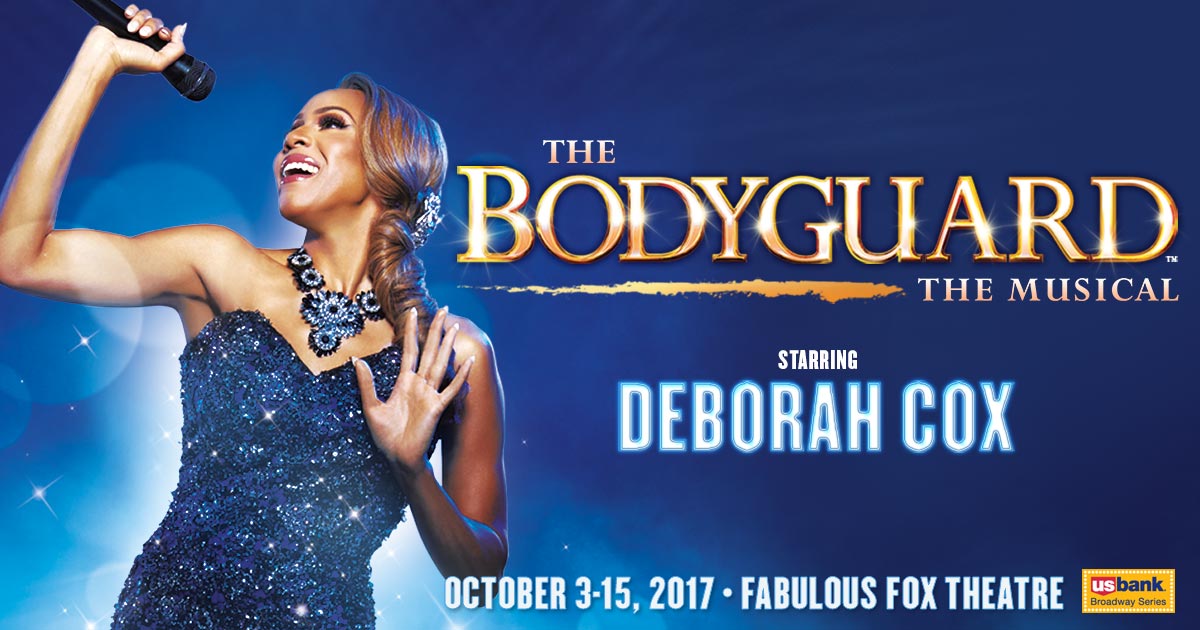 Based on the smash hit film, the award-winning musical will star Grammy® Award-nominee and R&B superstar Deborah Cox! Former Secret Service agent turned bodyguard, Frank Farmer, is hired to protect superstar Rachel Marron from an unknown stalker. Each expects to be in charge; what they don’t expect is to fall in love. A breathtakingly romantic thriller, THE BODYGUARD features a host of irresistible classics including “Queen of the Night,” “So Emotional,” “One Moment in Time,” “Saving All My Love,” “Run to You,” “I Have Nothing,” “I Wanna Dance with Somebody” and one of the biggest selling songs of all time – “I Will Always Love You.” 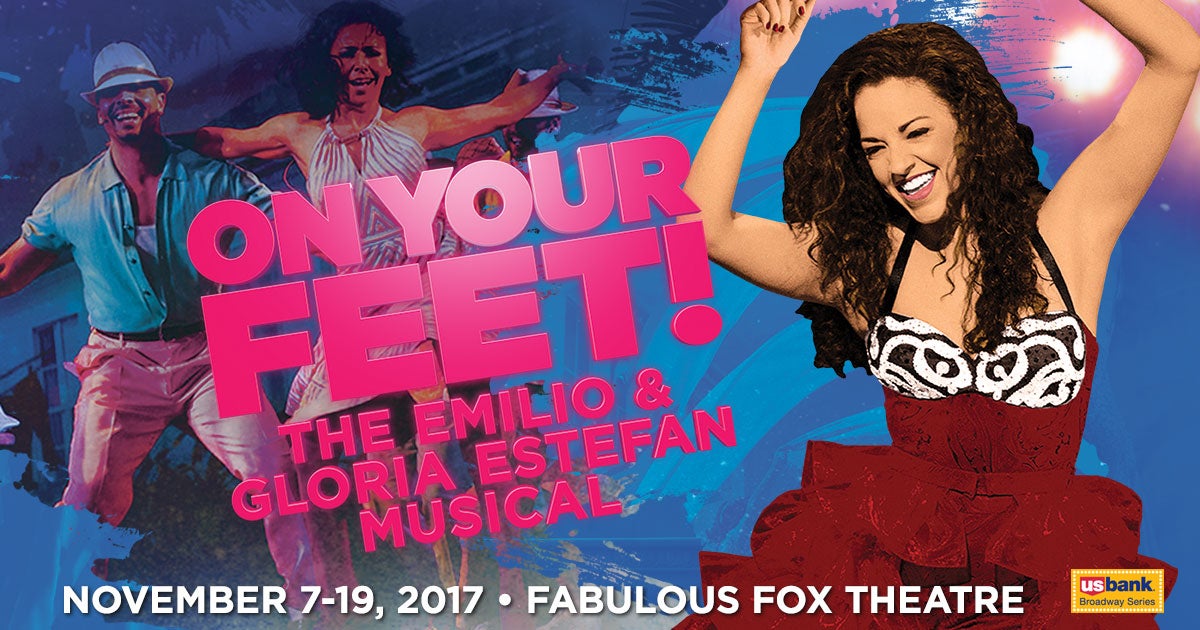 From their humble beginnings in Cuba, Emilio and Gloria Estefan came to America and broke through all barriers to become a crossover sensation at the very top of the pop music world. But just when they thought they had it all, they almost lost everything. From international superstardom to life-threatening tragedy, ON YOUR FEET! takes you behind the music and inside the real story of this record-making and groundbreaking couple who, in the face of adversity, found a way to end up on their feet. Directed by two-time Tony Award® winner Jerry Mitchell (Kinky Boots), with choreography by Olivier Award winner Sergio Trujillo (Jersey Boys) and an original book by Academy Award® winner Alexander Dinelaris (Birdman), ON YOUR FEET! features some of the most iconic songs of the past quarter century -  and one of the most inspiring stories in music history.

Two worlds collide in the Lincoln Center Theater production of this “breathtaking and exquisite” (The New York Times) musical, directed by Bartlett Sher. One of Rodgers & Hammerstein’s finest works, THE KING AND I boasts a score that features such beloved classics as “Getting To Know You,” “I Whistle a Happy Tune,” “Hello Young Lovers,” “Shall We Dance” and “Something Wonderful.” Set in 1860s Bangkok, the musical tells the story of the unconventional and tempestuous relationship that develops between the King of Siam and Anna Leonowens, a British schoolteacher whom the modernist King, in an imperialistic world, brings to Siam to teach his many wives and children. Winner of the 2015 Tony Award® for Best Musical Revival, THE KING AND I is “too beautiful to miss” (New York Magazine). 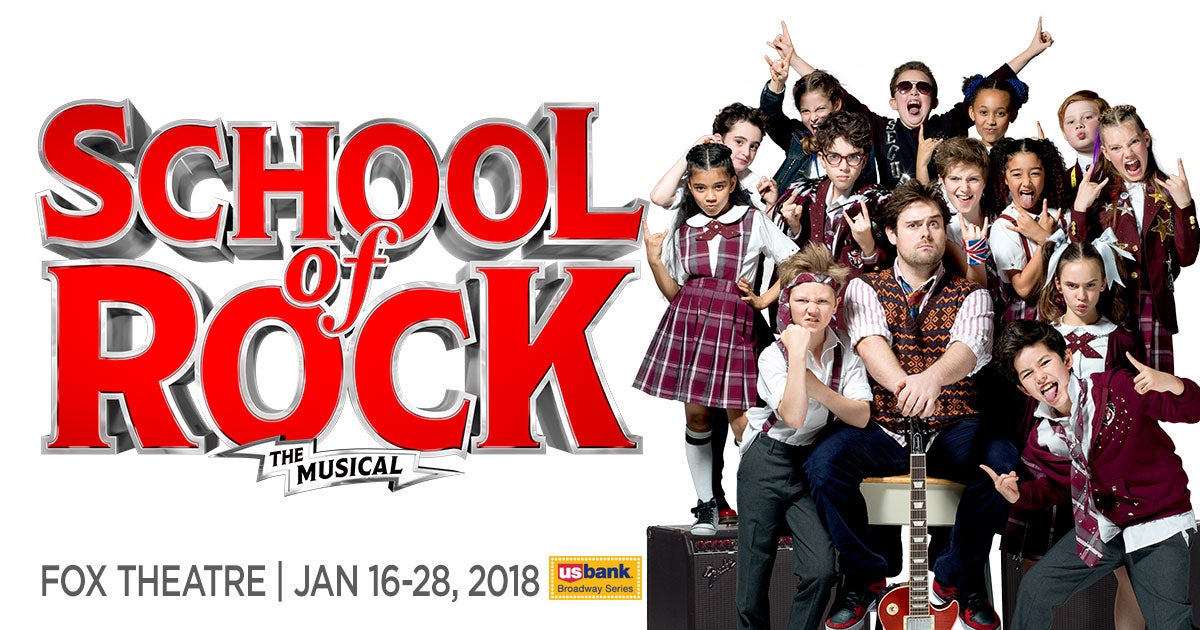 SCHOOL OF ROCK is a New York Times Critics’ Pick and “an inspiring jolt of energy, joy and mad skillz!” (Entertainment Weekly). Based on the hit film, this hilarious new musical follows Dewey Finn, a wannabe rock star posing as a substitute teacher who turns a class of straight-A students into a guitar-shredding, bass-slapping, mind-blowing rock band. This high-octane smash features 14 new songs from Andrew Lloyd Webber, all the original songs from the movie and musical theater’s first-ever kids rock band playing their instruments live on stage. Vanity Fair raves, “fists of all ages shall be pumping!” 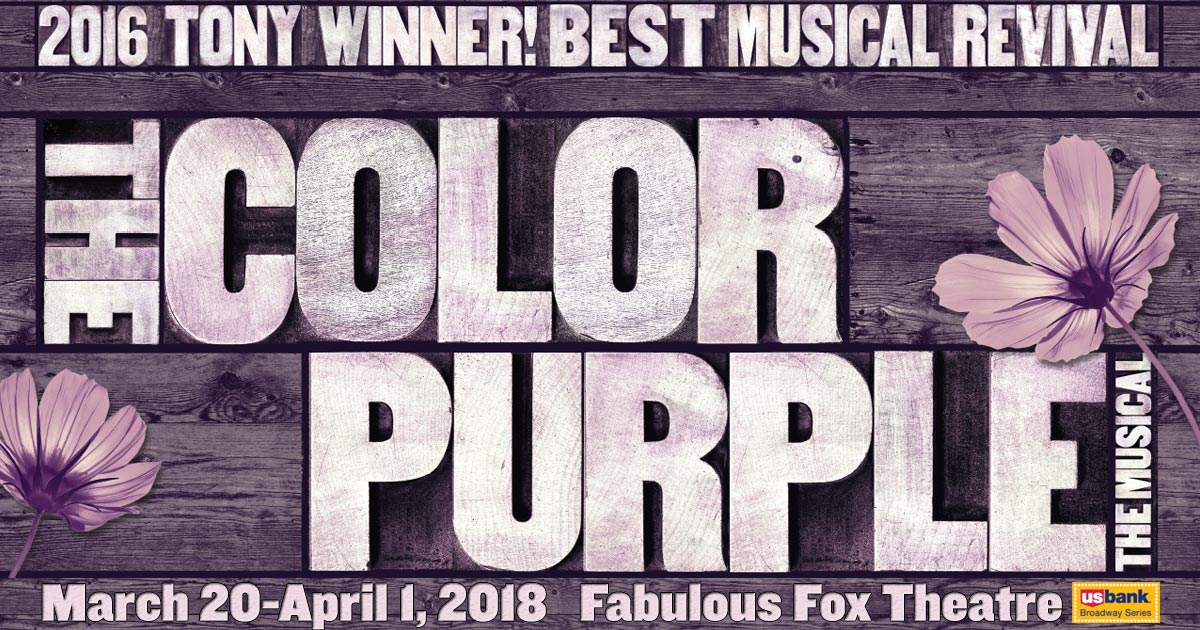 THE COLOR PURPLE is the 2016 Tony Award® winner for Best Musical Revival.  Hailed as “a direct hit to the heart” (The Hollywood Reporter), this joyous American classic has conquered Broadway in an all-new "ravishingly reconceived production that is a glory to behold” (The New York Times) directed by Tony winner John Doyle. With a soul-raising score of jazz, gospel, ragtime and blues, THE COLOR PURPLE gives an exhilarating new spirit to this Pulitzer Prize-winning story. This production is a stunning re-imagining of an epic story about a young woman’s journey to love and triumph in the American South. It’s the musical sensation that New York Magazine calls “one of the greatest revivals ever.” Experience the exhilarating power of this Tony-winning triumph! 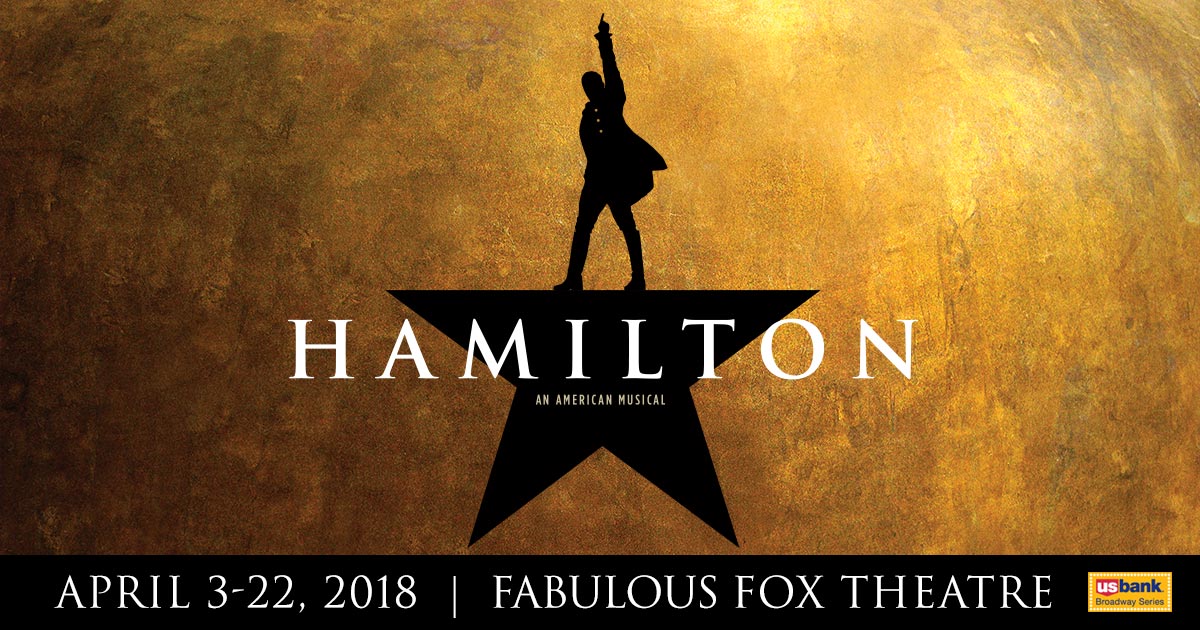 HAMILTON is the story of America's Founding Father Alexander Hamilton, an immigrant from the West Indies who became George Washington's right-hand man during the Revolutionary War and was the new nation’s first Treasury Secretary.  Featuring a score that blends hip-hop, jazz, blues, rap, R&B, and Broadway, HAMILTON is the story of America then, as told by America now.  With book, music and lyrics by Lin-Manuel Miranda, direction by Thomas Kail, choreography by Andy Blankenbuehler and musical supervision and orchestrations by Alex Lacamoire, HAMILTON is based on Ron Chernow’s biography of Founding Father Alexander Hamilton.

Seven Broadway specials will be offered to 2017–2018 season ticket holders for priority seating before their public on-sale dates. Back by popular demand, A CHRISTMAS CAROL will run during the holidays for the 27th time December 14-17. The enchanting Rodgers + Hammerstein’s CINDERELLA returns December 27-31.  A new production of the beloved classic Rodgers & Hammerstein’s THE SOUND OF MUSIC returns February 2-4. The family favorite THE WIZARD OF OZ, will delight St. Louis’ audiences February 23-25. CHICAGO, the razzle dazzle tale of sin and celebrity, will make its way back to the Fabulous Fox March 2-4.

Cameron Mackintosh’s spectacular new production of Andrew Lloyd Webber’s THE PHANTOM OF THE OPERA returns for a limited engagement May 9-20. Back by popular demand, THE BOOK OF MORMON will close out the season May 29 - June 3.

New six-show season ticket packages will go on sale Friday, April 14 at 10 a.m. Current U.S. Bank Broadway season ticket holders will receive their renewal information beginning the week of March 27. On-sale dates for individual shows will be announced later. For more information, please call the Fox Subscription office at 314-535-1700. Groups of 15 or more should call 314-535-2900 for special rates and reservations. The Broadway Series at the Fabulous Fox Theatre is presented by U.S. Bank.