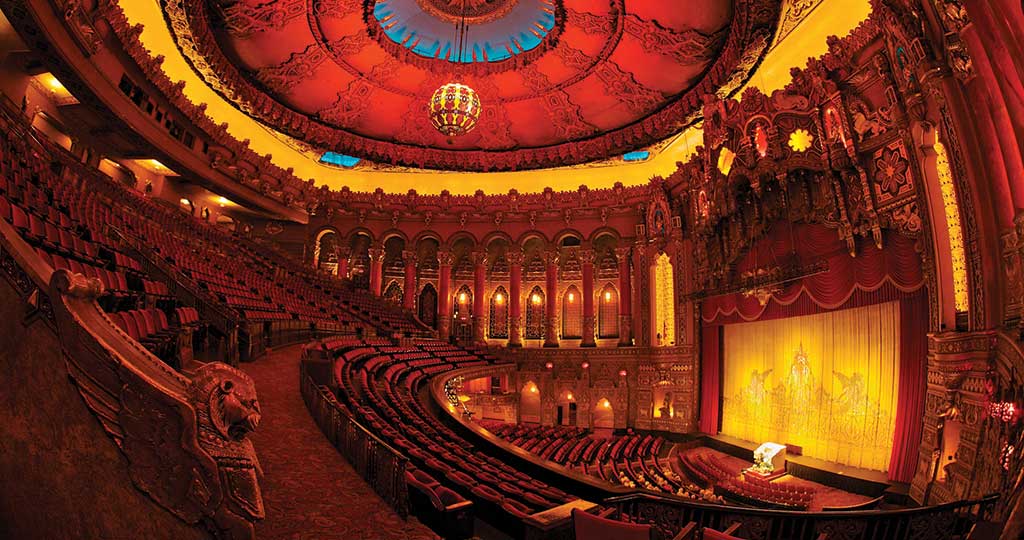 The Fabulous Fox is pleased to announce the end of its year-long performance intermission with a series of concerts at the iconic venue. STL Sounds at the Fabulous Fox will feature local bands performing unique sets, a comedy showcase and two anniversary celebrations of legendary concert events.  Welcomed by Music at the Intersection, this series will bring audiences back to Grand Center and The Fox Theatre to begin the process of “ramping” up to full capacity Fox shows in the fall.

Events will be socially-distanced with tickets sold in pods of 2-4 seats. Maximum capacities will start at 250 and increase as allowed by our city health and government officials.  In addition to social distancing, protocols will include mandatory face coverings for the audience and Fox staff.  The Fabulous Fox has enhanced its cleaning procedures and air filtration along with adding other safety measures as outlined on the attached list.  Tickets will go on sale at 10 a.m. on Thursday, April 1.

“We can’t wait to open our doors to St. Louis concert fans so they and our associates can enjoy the excitement of live music we have all missed for more than a year now.  And we are thrilled to offer this unique opportunity for local bands to play the Fox stage for the first time” said Jim Downey, General Manager of MetroTix and the producer of the event. “These local artists have felt the pain of little to no work and the loss of their artist expression over this past year. We hope this will be the beginning of a promising 2021 for all of us”

CITY SHOWCASE: COMEDY AT THE FOX

Chris Denman, host of “We Are Live,” has assembled an extraordinary group of comics which he will host for this special event.  Angela Smith is a rising artist who has honed her talent at Helium Comedy Club, The Funny Bone, The LouFest Redo and Flyover Comedy Festival.  Comedian and battle rapper Reggie Edwards, a regular at St. Louis clubs, has also established himself on the New York comedy scene over the last five years.  St. Louis native Larry Greene has charmed a wide range of audiences across the country with his ‘dose of reality’ wit and humor.  Hailing from the former Soviet Union but growing up in Kansas City, Tina Dybal uses her unique background, caustic humor and memorable stage presence to delight audiences.  A veteran and leader of our local comedy scene and the SOLC Podcast Network, Jovan Bibbs has performed and produced shows using his hilarious stories and relatable point of view from here to New York over the last decade.

Rafe Williams is the perfect headliner to round out our comedy showcase.  His reputation as a crowd favorite has landed him at the top of the STL comedy scene with national recognition. He was named The Funniest in STL by Riverfront Times Magazine in 2017, one of “2016’s Rising Stars in Arts and Entertainment” by GO! Magazine and the St. Louis Post-Dispatch, and has the distinction of winning Helium Comedy Club’s first annual “Funniest Person in St. Louis” competition in 2016.  Williams recorded his first television stand-up set in 2020 for “Live from Zanies” on Circle TV Network and released his debut comedy album on Sirius XM and all streaming platforms in January of 2020.

AN EVENING WITH THE FUNKY BUTT BRASS BAND

The Funky Butt Brass Band was formed in 2008 by six talented musicians who respect and revere the New Orleans brass band tradition. The Funky Butt Brand Band takes classic New Orleans brass tunes and sprinkles in their own brand of special Saint Louis musical magic. At any performance they will also add some Chicago blues, Memphis soul, southern rock and St. Louis R&B. For one of the normally busiest bands in St. Louis, this Fox appearance will mark their first since January 3.

Formed in 2016, Alligator Wine is a full force Grateful Dead tribute band known for its high energy live shows with vocal harmonies. The current lineup features members of several top notch local bands who bring their significant skills and knowledge of the music and the catalogue to the stage every night. Since the Grateful Dead had a special connection to the Fox Theatre in the 1970s, Alligator Wine will perform the Dead’s iconic December 10, 1971 Fox concert in its entirety.  So be prepared for two epic 90 minute sets 50 years after the original. This show will feature special guests David Grelle on keys and Nick Elwood on guitar.

AN EVENING WITH THE MIGHTY PINES

Like the steady and strong trees from which they take their name, The Mighty Pines continue to grow in stature, creating vast musical landscapes with their layered harmonies and thoughtfully crafted instrumentation. The band, which hails from St. Louis, generates a palpable vibe on their new album, Late Last Night. Produced by Steve Berlin (Los Lobos), Late Last Night stretches out with a sonic spaciousness, sliding effortlessly from roots and folk ballads to rock and soul. It also showcases the band’s growth as songwriters, arrangers, singers, and musicians. The Mighty Pines has toured nationally and supported renowned acts such as JJ Grey & Mofro, The Dead South, Parker Millsap, Fruition and Sam Bush.  They are excited for their first St. Louis engagement of 2021 to be on stage at the Fox.

AN EVENING WITH SUPERJAM

Celebrate the glory of a bygone era, when rock was so immense only stadiums could contain it.  SUPERJAM takes rock fans back to screaming guitars and killer rock poses; racks of keyboards and questionable fashions; and ear splitting vocals, bass and drum solos.  Performing the music of Boston, STYX, Journey, Foreigner, REO Speedwagon, Sammy Hagar, Queen, Santana, The Who, Toto, Rush, Cheap Trick and many more of the classics of rock, SUPERJAM

stage at the Fox.

Celebrate the glory of a bygone era, when rock was so immense only stadiums could contain it.  SUPERJAM takes rock fans back to screaming guitars and killer rock poses; racks of keyboards and questionable fashions; and ear splitting vocals, bass and drum solos.  Performing the music of Boston, STYX, Journey, Foreigner, REO Speedwagon, Sammy Hagar, Queen, Santana, The Who, Toto, Rush, Cheap Trick and many more of the classics of rock, SUPERJAM is celebrating their 10th anniversary.

Additional shows may be added to STL Sounds at the Fabulous Fox in the coming weeks. Tickets for all concerts are $15 and will be sold in socially-distanced pods of 2-4 seats.  They go on sale April 1 at Metrotix.com or by phone at 314-534-1111 and are available up until show time. The Fox Box office is currently closed.  Tickets will be delivered to guests via their mobile device or for print-at-home.

Guests can read the full list of Fox safety measures and the protocols to be followed by Associates, performers and guests at /www.fabulousfox.com/protocols.  The list will be sent to each guest after ticket purchase, but guests are encouraged to review them before purchasing tickets.

STL Sounds at the Fabulous Fox is welcomed by