Get to Know The Show!

The Bridges of Madison County 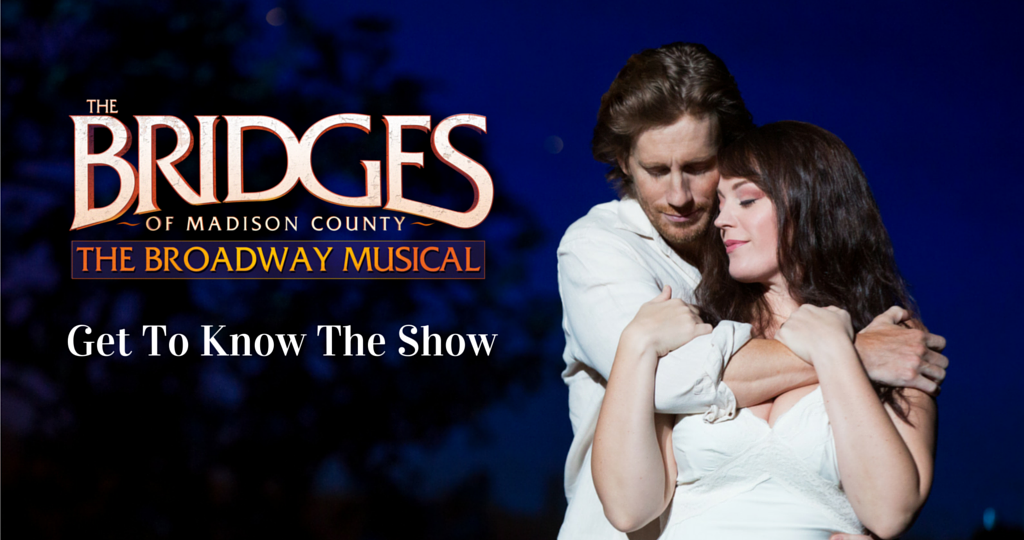 The Bridges of Madison County

Our 2015-2016 season continues with THE BRIDGES OF MADISON COUNTY, one of the most romantic stories ever written! The story first captured the nation’s attention as a best-selling novel by Robert James Waller and it is now an irresistible, two time Tony Award®-winning Broadway musical. This stunning new production features gorgeous, soulful music by Tony Award®-winning composer Jason Robert Brown (Parade, The Last Five Years) that the Daily News hails as “one of Broadway’s best scores in the last decade.” THE BRIDGES OF MADISON COUNTY is the unforgettable story of two people caught between decision and desire, leaving both characters forever changed.

The Characters: What Do You Call a Man Like That?

THE BRIDGES OF MADISON COUNTY tells the story of Iowa housewife Francesca Johnson and her life-altering, tumultuous romance with wandering photographer Robert Kincaid. Francesca is an Italian war-bride living a quiet, unfulfilling life on the farm. Her family—indifferent husband Bud, stubborn son Michael, and reluctant daughter Carolyn travel to Indianapolis to show Carolyn’s prize steer. That afternoon, National Geographic photographer Robert Kincaid arrives at her farm, asking for directions to the Roseman Bridge. When Francesca agrees to show him the way, a chance encounter becomes a second chance at so much more.

The story of THE BRIDGES OF MADISON COUNTY takes place in the scenic heartland of Iowa, with the Midwest serving as the backdrop for the Robert James Waller romance. The bridges of Madison County include the Roseman Bridge and the Holliwell Bridge both located in Winterset, the small town that is the focus of the show.

The Roseman Covered Bridge is featured in THE BRIDGES OF MADISON COUNTY and was originally built in 1883 by Benton Jones. The bridge stands 107 feet in length and it is the only bridge that stands in its original setting. The Holliwell Bridge was built in 1880 by Benton Jones and C. K. Foster to span the river. The longest covered bridge, Holliwell measures 122 feet in length.

The Story: A Love Story

When the daughter and son of the late Francesca Johnson return home to oversee the arrangements for their mother’s funeral, they are shocked to learn that their mother wished to have her ashes scattered from the Roseman Bridge, not buried beside their father. As the children explore Francesca’s belongings, they discover her diary that tells the story of how Francesca met and fell in love with National Geographic photographer Robert Kincaid. THE BRIDGES OF MADISON COUNTY explores the joyful discovery of love and painful but rewarding sacrifice.

With a score by Jason Robert Brown, the stunning music from THE BRIDGES OF MADISON COUNTY was hailed by the Daily News as “one of Broadway’s best scores in the last decade.” Fans of shows like A Light In the Piazza and South Pacific will love the lush orchestrations and the unforgettable melodies presented in the show. According to the New York Times, the show “brings textures of yearning to [Francesca] that make us experience the world through her startled, newly awakened senses. You don’t want to miss your chance to explore the world of THE BRIDGES OF MADISON COUNTY.

Don’t miss this stunning production that captures the romance of the story. THE BRIDGES OF MADISON COUNTY opens at the Fabulous Fox April 5-17.