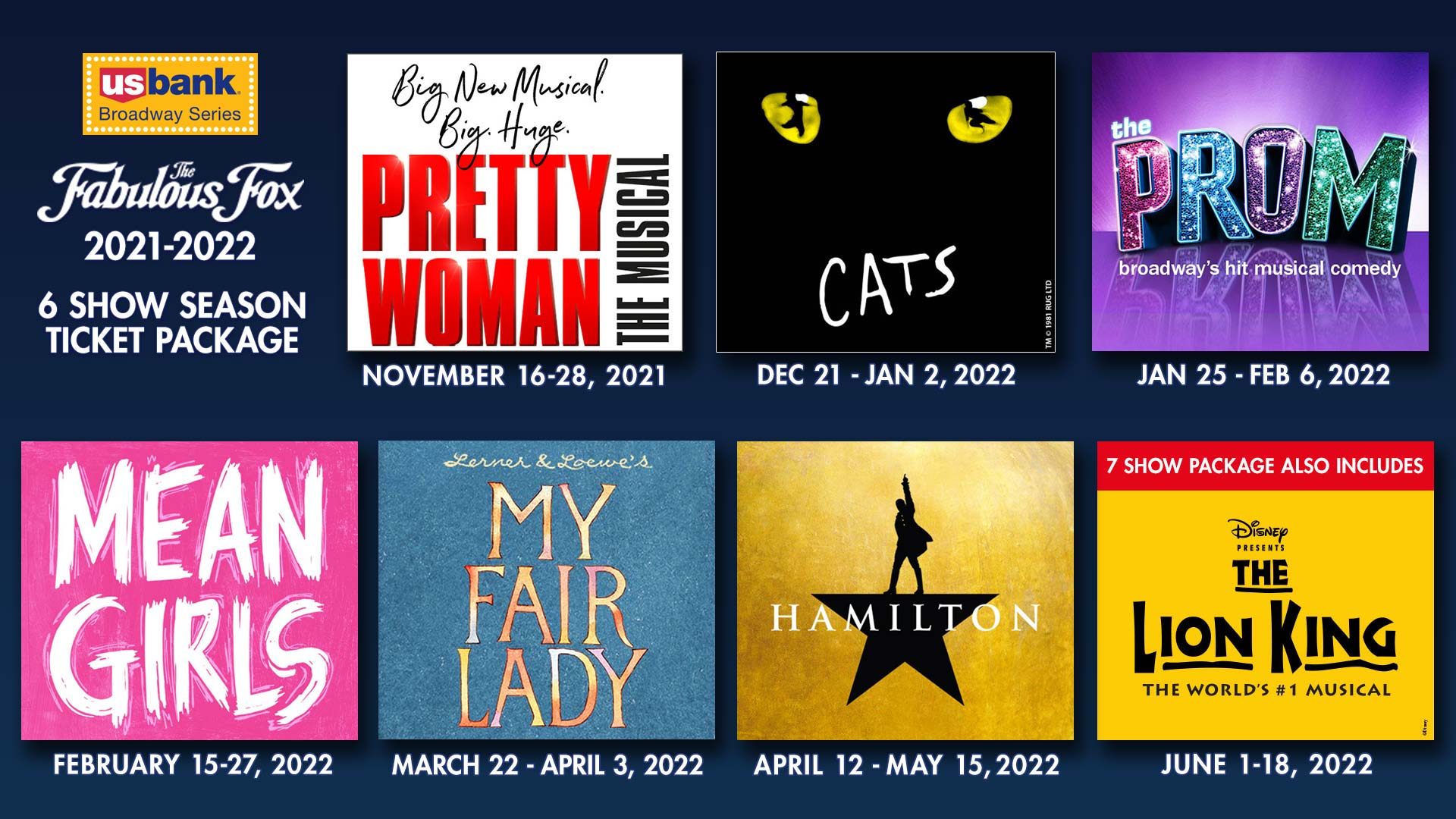 SEASON TO INCLUDE HAMILTON AND DISNEY'S THE LION KING

The Fabulous Fox Theatre is thrilled to announce the return of the U.S. Bank Broadway Series to the Fox stage. “After our long intermission that began in March 2020, we can’t wait for this new season to begin on November 16, 2021” said Director of Programming John O’Brien. The six-show season will include two of the shows that were postponed at the end of the 2019-2020 season, HAMILTON and CATS; and four postponed shows from the 2020-2021 season, PRETTY WOMAN: THE MUSICAL, THE PROM, MEAN GIRLS and MY FAIR LADY. “We are thrilled to fit most of our missed shows in the coming season,” said O’Brien. “Although Disney’s Frozen will need to wait until a future season, we will have the return of Disney’s THE LION KING in the summer of 2022.” Subscribers will have the option to purchase the six-show package or add THE LION KING for a seven-show package.

“The Fabulous Fox is working with government and health officials to create and implement health and safety protocols that will ensure the safe return of audiences at full capacity so subscribers can enjoy their same great seats.  This does include improvements to the Theatre’s air handling system. More information along with a detailed outline of protocols will be made available prior to our reopening,” said O’Brien.

CATS | December 21, 2021-January 2, 2022
CATS, the record-breaking musical spectacular by Andrew Lloyd Webber that has captivated audiences in over 30 countries and 15 languages, will resume its tour across North America!  Audiences and critics alike are rediscovering this beloved musical with breathtaking music, including one of the most treasured songs in musical theater—"Memory”. Winner of 7 Tony Awards® including Best Musical, CATS tells the story of one magical night when an extraordinary tribe of cats gathers for its annual ball to rejoice and decide which cat will be reborn. The original score by Andrew Lloyd Webber (The Phantom of the Opera, School of Rock, Sunset Boulevard), original scenic and costume design by John Napier (Les Misérables), all-new lighting design by Natasha Katz (Aladdin), all-new sound design by Mick Potter, new choreography by Andy Blankenbuehler (Hamilton) based on the original choreography by Gillian Lynne (Phantom) and direction by Trevor Nunn (Les Misérables) make this production a new CATS for a new generation!

THE PROM | January 25-February 6, 2022
Everyone’s invited to the joyous Broadway hit that New York Magazine calls “smart and big-hearted” and The New York Times declares it “makes you believe in musical comedy again!” THE PROM is a new musical comedy about big Broadway stars on a mission to change the world and the love they discover that unites them all.  Variety raves, “It’s so full of happiness that you think your heart is about to burst.” And The Hollywood Reporter cheers, “It’s comic gold!” You belong at THE PROM!

MEAN GIRLS | February 15-27, 2022
Direct from Broadway, MEAN GIRLS is the hilarious hit musical from book writer Tina Fey (“30 Rock”), composer Jeff Richmond (“Unbreakable Kimmy Schmidt”), lyricist Nell Benjamin (Legally Blonde) and director Casey Nicholaw (The Book of Mormon). Cady Heron may have grown up on an African savanna, but nothing prepared her for the vicious ways of her strange new home: suburban Illinois. Soon, this naïve newbie falls prey to a trio of lionized frenemies led by the charming but ruthless Regina George. But when Cady devises a plan to end Regina’s reign, she learns the hard way that you can’t cross a Queen Bee without getting stung. New York Magazine cheers, “MEAN GIRLS delivers with immense energy, a wicked sense of humor and joyful inside-jokery.” USA Today says, “We’ll let you in on a little secret, because we’re such good friends: Get Your Tickets Now!”

MY FAIR LADY | March 22-April 3, 2022
From Lincoln Center Theater and director Bartlett Sher comes “a sumptuous new production of the most perfect musical of all time” (Entertainment Weekly), Lerner & Loewe’s MY FAIR LADY.  Boasting such classic songs as “I Could Have Danced All Night,” “The Rain in Spain,” and “Wouldn’t It Be Loverly,” MY FAIR LADY tells the story of Eliza Doolittle, a young Cockney flower seller, and Henry Higgins, a linguistics professor who is determined to transform her into his idea of a “proper lady.”  But who is really being transformed?

HAMILTON | April 12-May 15, 2022
HAMILTON is the story of America then, told by America now. Featuring a score that blends hip-hop, jazz, R&B and Broadway, HAMILTON has taken the story of American founding father Alexander Hamilton and created a revolutionary moment in theatre—a musical that has had a profound impact on culture, politics, and education. With book, music, and lyrics by Lin-Manuel Miranda, direction by Thomas Kail, choreography by Andy Blankenbuehler, and musical supervision and orchestrations by Alex Lacamoire, HAMILTON is based on Ron Chernow’s acclaimed biography. It has won Tony ® , Grammy ® , and Olivier Awards, the Pulitzer Prize for Drama, and an unprecedented special citation from the Kennedy Center Honors. This “theatrical landmark has transformed theater and the way we think about history” (The New York Times)

THE LION KING | June 1-18, 2022
More than 100 million people around the world have experienced the phenomenon of Disney’s THE LION KING, and now you can, too, when St. Louis’ best-loved musical returns to the Fabulous Fox Theatre.  Winner of six Tony Awards®, including Best Musical, this landmark musical event brings together one of the most imaginative creative teams on Broadway.  Tony Award®-winning director Julie Taymor brings to life a story filled with hope and adventure set against an amazing backdrop of stunning visuals.  THE LION KING also features some of Broadway’s most recognizable music, crafted by Tony Award®-winning artists Elton John and Tim Rice.  There is simply nothing else like THE LION KING.

Series Specials
Four additional Broadway shows will be offered as specials to 2021–2022 season ticket holders for priority seating before their public on-sale dates.

The splendor of the holiday season at the Fox will return in 2021.   One of the world’s most beloved and timeless stories is a holiday tradition at the Fox: the Nebraska Theatre Caravan production of A CHRISTMAS CAROL will play December 2-5.  A MAGICAL CIRQUE CHRISTMAS brings dazzling performers and breathtaking cirque artists to the Fox stage for a spell-binding holiday production December 9.  The most famous reindeer of all will soar into the Fox December 17-18 when RUDOLPH THE RED-NOSED REINDEER the Musical takes the Fox stage.

The 25th Anniversary production of RIVERDANCE returns March 11-13. This tour is a powerful and stirring reinvention of this beloved favorite, celebrated the world over for its Grammy award-winning score and the thrilling energy and passion of its Irish and international dance. Disney’s THE LION KING will also be available as a special for those who choose the six-show season.

Current season ticket holders will receive their specific account information with their options for the six or seven show package in late April.

New season ticket packages will go on sale June 7.  On-sale dates for individual shows will be announced later. For more information, visit www.FabulousFox.com.  The Broadway Series at the Fabulous Fox Theatre is presented by U.S. Bank.  The Fox Box office is currently closed.