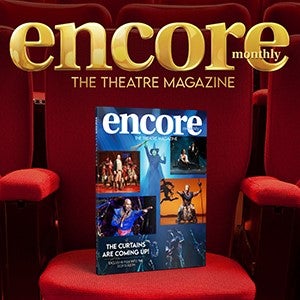 ENCORE MONTHLY is a new theatre magazine for the 21st Century. It celebrates everything we love about American theatre, whether it’s happening on the stages on Broadway or the pages we follow on social media.

With its distinctive voice and contributions from both established and emerging writers, ENCORE MONTHLY offers a unique and intimate view of the world of the American stage. Its exclusive content takes readers into the wings, behind the scenes and to all the places theatre people come together. It also takes a close look at the lifestyle of theatre lovers, getting inside their living rooms to examine how they spend their time when they’re not sitting in their orchestra seats. It covers everything from food, wine, fashion, travel and much, much more—but all from a theatre lover’s specific point of view. ENCORE MONTHLY goes far beyond the experience of seeing a show: it illustrates how that experience can shape our lives forever.

Subscribe now to enrich your theatre-going and theatre-loving experience with ENCORE MONTHLY.

Playbill.com - 16 Broadway plays and musicals you can watch onstage from home.

Available Now
A group of down-on-their luck Broadway stars shake up life in small-town Indiana as they rally behind a teen fighting to bring her girlfriend to The Prom.  Based on the Broadway musical of the same name, this film stars Meryl Streep, James Corden, Nicole Kidman and Andrew Rannells.

Available Now
The theatrical concert film of David Byrne’s American Utopia is a career-spanning celebration of Bryne’s music, both with Talking Heads and his solo work.  Director Spike Lee filmed the show during its Broadway run at the Hudson Theatre.

This streaming service for theatre fans presents hundreds of high-quality and professionally filmed productions in their entirety through its platform.

This fabulous video features cast members from Les Misérables, The Phantom of the Opera and Mary Poppins performing on Britain’s Got Talent.